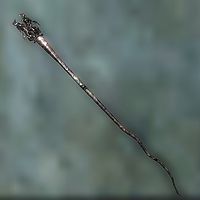 The Staff of the Everscamp

The Staff of the Everscamp is a Daedric staff associated with Sheogorath. Once the staff is activated by reading its engraved rune, four non-hostile Everscamps appear and follow the staff's bearer. The staff's bearer is no longer able to put down or get rid of the staff. There are only two ways to get rid of the staff: find someone else who is willing to take it, or return to its original location, namely the shrine of Sheogorath in Darkfathom Cave. Rosentia Gallenus has accidentally activated the staff and enlists the player's help in getting rid of it during the quest Whom Gods Annoy.