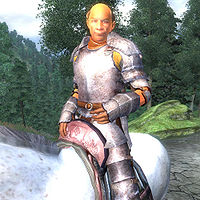 Sir Roderic on the road north of Bravil 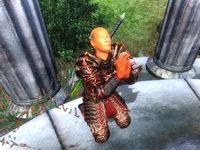 Sir Roderic of Wayrest is an Imperial warrior added by the Knights of the Nine official plug-in. His squire Lathon mentions that he is a hero of The War of the Bend'r-mahk.

All of Sir Roderic's equipment is leveled; he may carry heavy boots, greaves, cuirass, gauntlets, and helmet (25% chance existence on the latter two). He will carry middle class shoes, pants, and a shirt, as well as a potentially enchanted longsword or claymore. He also has a 25% chance to carry two repair hammers.

You will most likely meet Sir Roderic traveling with Lathon on the Green Road north of Bravil during the Pilgrimage quest. 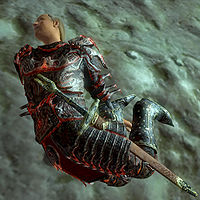 Asking him about the Pilgrimage before you speak to the Prophet in Anvil will have him tell you about his quest; "I have taken up the call of the Prophet to quest for the Crusader's Relics, and so I walk the Pilgrim's Way. Have you not heard what happened to the Chapel in Anvil?" If you yourself are on the Pilgrim's Way he will instead reply by saying; "I have taken up the Prophet's call to defend the Faith. Only a true knight wielding the Crusader's Relics can stop the evil that now threatens us. I walk the Pilgrim's Way, as did the questing knights of old. I would be glad of your company on the road, if your way lies with mine." Questioning him about the Relics he mentioned will have him tell you about these artifacts; "The armor and weapons of the legendary Pelinal Whitestrake, the Divine Crusader. Knights have quested for them for thousands of years. But the Prophet says that the time has come for them to finally be recovered, lest the faithful be scattered and destroyed." Asking him about the Anvil Chapel will have him tell you what he knows about the recent grisly events at the Chapel of Dibella: "It was terrible. I've fought in many battles, but this... ... the priests and priestesses of Dibella, slaughtered within the very walls of her Chapel. The Altar itself desecrated! No one saw who did it. No one yet living, that is. Although many heard the screams. Speak to the Prophet, in Anvil. He knows what this portends. He says it is only the beginning." Asking him about the Prophet before you have spoken to him will have him tell how the Prophet's preaching has affected him; "He preaches outside the Chapel of Dibella in Anvil. No one knows where he comes from, but he speaks the holy word like I've never heard before. You see me now a changed man. Lathon can testify to that. Before I met the Prophet, I was nothing more than a hired sword. Go to Anvil. Speak to the Prophet. You, too, may find yourself taking up his holy quest, despite yourself." If you have already spoken to Prophet he will instead reply to your questioning by saying; "You have heard him. Like me, you know he speaks the truth. If the Nine will it, I will be the one to recover the Crusader's Relics. Or, perhaps that honor will fall to you." As you end a conversation with Sir Roderic he will call for the blessings of the Nine for your request as you part ways: "The blessings of the Nine upon your quest. Perhaps our paths will cross again."

Speaking to Sir Roderic after you have initially spoken to him will have him inform you on which one of the Wayshrines he currently is traveling to; "I seek the blessing of Father Akatosh, who knows all things and protects us from the unseen threat. Who better to guide us in these dark days?" "Come with me, if you will, to the Wayshrine of Arkay. I will offer a prayer for the souls of those who died in the Nine's service." "I go to offer prayers to blessed Dibella, and to swear vengeance on those who profaned her Chapel and cruelly slew her acolytes." "Follow me, if you also seek the divine wisdom of Julianos. His Wayshrine is this way." "I seek the blessing of Kynareth. Come, pray with me to the Goddess of the Air. Her Wayshrine is up ahead." "Mother Mara will bless my quest, I'm sure. I would be glad of your company on the road, if you too wish to pray at her shrine." "Will you come with me to seek the blessing of Stendarr the Steadfast? The land is sore in need of righteous governance." "Talos, the Dragonborn, patron of questing knights, will surely look with favor upon us. Walk with me to his shrine, if you will." "I am on my way to the Wayshrine of Zenithar. Come with me and we shall seek Zenithar's blessing together, if you will."

After you have completed the Priory of the Nine quest, Lathon will inform you of Sir Roderic's death, and in the quest The Sword of the Crusader, you will discover his body at Underpall Cave. At high levels he has Daedric armor on his body in Underpall Cave, so if you need Daedric armor this is a good place to find it.