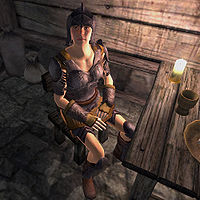 Rigmor is a Nord warrior, a mercenary by trade, who can usually be found at the Roxey Inn, together with her two "colleagues," Brucetus Festinius and S'razirr, as well as their employer, Claude Maric.

Prior to the related quest, she lives a relaxed life at the inn, sleeping between 10pm and 6am and eating for two hours at 8am, 12pm and 6pm. Outside these times she wanders around the inn, sometimes conversing with the other guests.

When the quest is initiated, she and the two other hired thugs will travel to the Ayleid ruin of Malada, where they will set up a camp directly west from its entrance. Once there, she will spend all day patrolling the camp together with Brucetus Festinius, if not eating or sleeping at her usual times. If she survives the quest, she will head back to the Roxey Inn, returning to her usual routines and pretending it never happened.

She wears a full suit of heavy armor, excluding a shield. This armor is the best possible at your level, and the helmet is enchanted. She is equipped with a leveled blunt weapon; at level 3 or higher it will be enchanted. Due to her high aggression, she will attack you if her disposition is low enough. She also carries a coarse linen shirt, laced leather pants, rough leather shoes and a small amount of gold.

She's not the most talkative person while staying at the inn, but once you run into her near Malada, she won't hesitate to lie about her presence: "Beautiful countryside, don't you think? We're just doing a bit of hunting and sightseeing, not that it's any of your business." If you talk to her after handing over the Ayleid carving during the related quest, Rigmor will dismissively tell you "It was even easier than Maric promised. Push off."