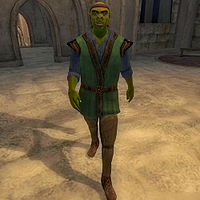 Orok gro-Ghoth is an Orc thief working as the steward Castle Chorrol. He provides you with some information during the Canvas the Castle quest.

He claims to have quite a few responsibilities as Arriana Valga's personal steward, but lives a rather uneventful life. He sleeps in the private quarters every night between 12am and 6am. His favorite pastime is wandering around near his quarters and he will do that until 10am, taking a quick break at 8am to unlock the door. We then heads to the great hall before returning intermittently to his quarters. At noon, he leaves the castle for a bit of browsing downtown in Northern Goods and Trade. He returns at 2pm, and spends the rest of the afternoon and the evening wandering around in the private quarters, doing absolutely nothing but chatting to the other castle residents and locking the door at midnight.

When assigning you for the Canvas the Castle quest, Countess Arriana Valga will point you towards her castle steward with the words: "I would try speaking to Orok gro-Ghoth who is my Steward. He resides in the Private Quarters section as well. If he isn't in the castle, he may be at the Northern Goods and Trade buying food to stock our larder." When you approach the Orc and ask him about clues, he will say: "I don't trust you enough to reveal details about the castle to you."

After raising his disposition accordingly, he will tell you what he knows: "Hmmmm. I don't remember seeing Chanel or Orgnolf that entire evening. But then again, I stayed in my quarters most of the night. There was no point in going on my usual walk with all of the rain falling. As far as Chanel and Orgnolf go, they seem fine to me. I only had a minor scrape with Orgnolf recently. I caught him drinking in the West Tower on the upper level. I told him if he didn't stop, I would tell the Countess. He just grumbled and agreed. He hasn't bothered me since." He will be of no further use in the investigation. You can, however, ask him about Chorrol which will hint you to another quest in town: "Do you know Reynald Jemane, the fellow who lives on the west side of Chorrol? I saw him in Cheydinhal recently, and said 'Hi,' and he pretended he didn't know me. I was quite irritated, and haven't spoken to him since. But, I wonder, was he really trying to be a fool? Or was something wrong?"