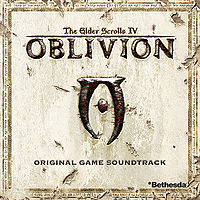 Cover art of the Oblivion soundtrack 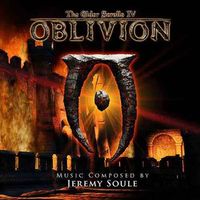 Oblivion's music was composed by Jeremy Soule. It is available from iTunes, Amazon, and Google Play, and was previously available from Directsong. If you have the PC version of the game, you can find the music files in the Oblivion\Data\Music folder, divided into 5 sub-folders depending on where they are used. They do not have the descriptive track-names and ID3-tags you'd get by purchasing them from Directsong, but are otherwise identical.

The music varies from slow, "exploration" themes to faster, "battle" themes. It is often easy to tell when an enemy sees the player character because the music will change sharply.

There are 28 tracks in total but only 26 are included in the soundtrack. The tracks "Success" and "Death" are not included and are played when the player levels up and dies, respectively. The game divides the tracks into five categories:

It won the MTV Music Award for Best Video Game Score[1] and the Official Xbox Magazine's Soundtrack of the Year[2]. The score was also nominated for a British Academy of Film and Television Award, losing out to Tomb Raider: Legend[3], and for the Outstanding Achievement in Original Music Composition award of the Academy of Interactive Arts & Sciences, which it lost to LocoRoco.[4]

Jeremy Soule stated that while composing the music he did not imagine any specific characters or events; rather, he wanted it "to comment on the human condition and the beauty of life". In a 2006 interview, he related that this desire came as a result of a car accident that occurred during his composition of the score. He said, "I ended up rolling in my car several times on an interstate while flying headlong into oncoming traffic ... I felt no fear ... I simply just acknowledged to myself that I've had a good life and I would soon have to say goodbye to all of it in a matter of seconds". Soule sustained only minor injuries, but commented that his feeling during the crash—"that life is indeed precious"—remained with him throughout the rest of the composition.[5][6]

Soule has shared some background on his composition for a couple of tracks:

Fall of the Hammer:

In 2009, the Czech Philharmonic Chamber Orchestra & Kuehn's Mixed Choir released an album called "Play! A Video Game Symphony" that consisted of orchestral versions of video game soundtracks. A nine-minute medley consisting of Reign of the Septims, Glory of Cyrodiil and Watchman's Ease features as track 11. The orchestra took the music on a world tour, including an April 2010 performance in Eugene, Oregon, which was attended by Jeremy Soule himself.[10]