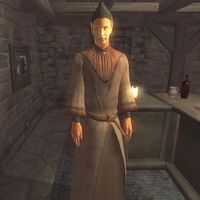 Lithnilian in the Imperial Bridge Inn

Lithnilian is an Altmer sorcerer and permanent resident at the Imperial Bridge Inn on the northern bank of Silverfish River.

A scholar of Welkynd Stones, he's been researching their origin for ten long years, causing much amusement among his fellow scholars. When he finally discovered the stones growing in a natural environment in the depths of Bramblepoint Cave, he stood before his major breakthrough. Unfortunately, he was attacked and had to flee the cave, losing all of his research notes in the process. During the No Stone Unturned quest, it's up to you to retrieve the notes from the cave, so he hasn't spent ten years in vain.

His life at the inn is an easy one, even if he spends a lot of time grumbling about his lost research to the other regulars. Like the other residents, he sleeps in the attic and gets out of bed every morning at 6am. He always starts the day with a three-hour breakfast downstairs in the dining area. Between 9am and 4pm he wanders restlessly around the inn, mumbling "Ten years of research down the drain" to everybody who cares to listen. At 4pm, he finally sits down in a chair and relaxes with his copy of Ruins of Kamel-Ze. At 8pm, he gets up and grumbles a bit more until he sits down for a late dinner at 10pm. At midnight he heads upstairs to the attic, finds his bed and goes to sleep.

He wears the rare tan robe along with a pair of gold trimmed shoes. He carries a cheese wedge, his book and a small amount of gold. Starting at level 5, he also carries a leveled staff. After the quest, he will furthermore carry his research notes wherever he goes. He knows a leveled set of sorcerer spells

The first time you meet him, he will get right down to business: "I don't suppose I could convince you to help me recover my research notes? I was doing some research in Bramblepoint Cave, and suddenly I was attacked. I grabbed everything I could and ran, but I fear I dropped my notes. Those notes are very important to me and represent ten years of my life. If you could recover them, I'd be sure to reward you appropriately." And he will reluctantly elaborate: "Well, if you must know, I've been studying the Welkynd Stones. Yes, the aquamarine colored crystals usually native to Ayleid ruins. It seems I'm the first to discover them growing in a natural cave. That's about all I can say about it."

When you return with his notes in hand, he will be more than happy: "Splendid... just splendid! I'd almost feared that you'd never return. I'm glad to see I was incorrect. As promised, I'd like to compensate you for your efforts."