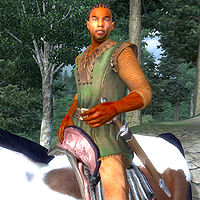 Lathon is a Redguard knight added by the Knights of the Nine official plug-in.

Before Lathon is knighted he will wear leather boots, tan linens, a forester's shirt, and either a pair of leather boots or a pair of pigskin shoes. In combat he will use a steel shortsword. At night, or when it's dark he will carry a torch to light his path. He carries four leveled restore health potions and a moderate amount of gold.

He is the squire of Sir Roderic and can be found at first on the road with him completing their Pilgrimage.