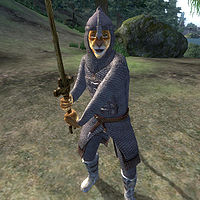 J'Baasha is a Khajiit bandit camped out near Fisherman's Rock north of Leyawiin with his gang members, Mogens Wind-Shifter, Ayisha, and Mensa Selas. As soon as Mogens commands it, J'Baasha will attack Mazoga and the player with his allies, bringing his death upon himself.

J'Baasha will not be in the game until the player agrees to take Mazoga to Fisherman's Rock at stage 50 of the quest. Once he appears at the camp, he will divide up his time between wandering around and sitting on one of the battered stools near the large fire.

J'Baasha is equipped with a set of leveled light armor, armed with a leveled blade, and carries a spare pair of pants. The only thing he has to say is "J'Baasha's an adventurer... just like you" and will then end the conversation.