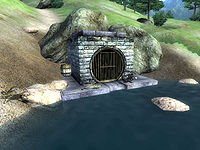 Imperial Sewers SE. Exit is the southeastern entrance to the Imperial City sewer system. It leads to a large sewer occupied by bandits and vampires.

Unlike other sewer entrances, this one isn't locked, and thus provides easy access to the South East Tunnel, which can also be entered from the Arboretum. A lone mudcrab guards the entrance and 7 bottles of ale and beer.