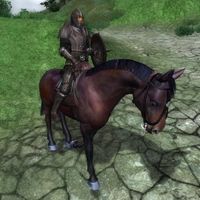 A mounted legionary, as seen in Cyrodiil during the Oblivion Crisis

In peacetime the Legion serves primarily as a garrison force — manning forts, patrolling roads, and providing guardsmen for towns, cities, counties, and nobles. They are empowered to arrest criminals and seize their property, among other things. In wartime, the Legion's responsibilities and powers are greatly increased. During conflicts, the Legion serves as an invading and occupying force, overwhelming opposition with numerical superiority and strict economy of force. For more information, see the lore article.

In Oblivion, it is not possible for you to join the Imperial Legion. However, nobles state that: "Legion duty here in Cyrodiil is usually a dull affair. In the east though, things are a bit more challenging, and one can make a name for oneself."

In Oblivion, the legion consists entirely of male Imperials, with the following exceptions:

The uniform of the Imperial Legion changed in between Morrowind and Oblivion. In Morrowind the Legionnaires wore Heavy Armor that closely resembled ancient Roman designs. In Oblivion the Legion is equipped with late medieval plate armor. No explanation is ever given for the change. More information is available at the article on Guard Uniforms.