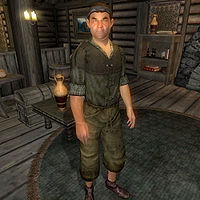 Helvius Cecia is an Imperial rogue and a member of the Thieves Guild in Bruma. He is the master trainer in Hand to Hand. During Turning a Blind Eye your secret meetings with the Gray Fox takes place in Helvius' basement.

Due to his affiliation with the Thieves Guild Helvius keeps a low profile and rarely leaves his domicile. On all days but Sundas, he wakes up at 6am and spends the next twelve hours wandering around in his house. Between 3pm and 5pm he may decide (50% chance) to pay a visit to Novaroma but will otherwise stay at home. At 6pm he picks up some food and enjoys at two-hour dinner, and then proceeds to wander around until his bedtime at midnight. On Sundas, he will make a rare exception to his secluded life and, at 10am, visit the Great Chapel of Talos and worship the Nine Divines. Once he has agreed to train you, he will cancel all his daily appointments and will wander around in the house 24 hours a day and offer services at all times. During Turning a Blind Eye, Helvius will patiently wait outside while you conduct business with the Gray Fox.

He wears a set of lower class clothing: a burlap vest, sack cloth pants, and a pair of stitched leather shoes. He carries his house key and a small amount of gold.

When you meet him for the first time, he will introduce himself and his beliefs: "Helvius Cecia. I do a little of this, a little of that. And I serve the Nine. Praise their Names!" When asked about his city of choice, he will tell you more about his special relationship with the Nine Divines: "All I need is a roof, some bread, and blessings of the Nine. Bruma is Gods' country, and the Gods are good to me."

When you approach Helvius about training he will laugh and ask: "Training, eh? The real question is, can you fight?" He will then elaborate: "You know, throw a good punch? Can you? I'd like to find out if I'm going to spend time working with you. So are you up for a sparring match? I'll make it easy on you. I won't throw a single punch. I just want to see what you've got, anyway. So, is it a deal?" If you back out, he will be insulted: "If you're afraid to have even a friendly little sparring match, why would I waste time training you?" When approached again he will repeat his question: "So, how about it? Are you ready to fight now? The offer still stands. You show me how well you can punch, and I'll think about training you. What do you say?" If you accept the challenge, he will lay out the rules: "Okay. If I see you reach for a weapon, I'm calling it off. And if you can actually hurt me, I'll tell you to stop. If this goes on for too long, and I get bored, I'll stop you. Now show me what you've got!" If you break his rules and draw a weapon, he will stop the session right away: "Hey! What did I tell you about weapons! That's it; we're done." If you fail to impress him, he will say: "That was disappointing at best. I was hoping for more from you." If you do good he will accept to train you with the words: "Not bad.... Not bad at all! Okay, you've definitely got some potential. I'll teach you what I know."