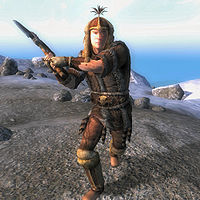 Havilstein Hoar-Blood is an axe-wielding Nord assassin who inhabits the campsite on Gnoll Mountain with his pet wolf, Redmaw. Hoar-Blood is an elite member of the Dark Brotherhood who meets his end at the hands of Lucien Lachance's silencer, who is deceived by Mathieu Bellamont into thinking that the vengeful sister of a mead-hall chieftain had taken out a contract on him.

Knowing that Redmaw guards the camp twenty-four hours a day, Havilstein sleeps securely in the tent every night between midnight and 6am. Once he wakes up, he takes a seat near the fireplace and enjoys its warmth until noon. At that time, he gets up and starts wandering around the camp. At 6pm, he once again sits down near the fireplace, this time for three hours. At 9pm, he takes a few rounds around the camp until he crawls back into the tent at midnight. He will attack you on sight.

Havilstein is always equipped with two battleaxes, one of which is enchanted (unless your character is less than level 3, in which case the enchanted battleaxe will be missing). His regular battleaxe will always be of the best possible quality for your level. He wears a full suit of fur armor. More important defensively is his "Black Hand Ability" which provides him with permanent 50% Resist Magic and 50% Resist Normal Weapons.