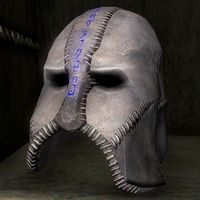 The Daedric artifact Gray Cowl of Nocturnal is a hood that was supposedly stolen from Nocturnal over 300 years ago. Whoever wears this hood takes on the identity of the Gray Fox: the wearer's fame, infamy, and bounty all become those of the Gray Fox. Any crimes committed (or good deeds done) are attributed to the Gray Fox rather than to the character wearing the hood. The cowl can be acquired at the end of the Thieves Guild quest line by completing the quest The Ultimate Heist.

The blue writing down the middle of the mask says "Shadow hide [y]ou", which is also a farewell in conversations with members of the Thieves Guild. As is common in the Daedric Alphabet, the letter Yahkem (Y) is omitted from the inscription.

You cannot be identified while wearing the cowl, and even if you take it off right in front of others, they won't associate you with the Gray Fox. Every time you put the cowl on, your bounty is set to 500 gold and your infamy is set to 100. When you take off the Cowl your own stats return. You can rack up a huge bounty as the Gray Fox, which will only be active when the mask is on, enabling players to go on crime sprees essentially consequence-free since they can just remove the mask.

In short terms, it does not make any sense to pay off the Gray Fox's bounty because it returns every time you take off the mask and put it on again. It only makes sense to pay off the bounty if you want to keep wearing the mask until you have finished your tasks as the Gray Fox, for example, do some crimes or quests that give you Infamy. In this case the Gray Fox would get the Infamy Points and not your normal character. If you come under attack while wearing the Cowl, you can remove it and yield to your attackers to make them stop.

Inside the Temple of the Ancestor Moths you can find a note written by the Office of the Unseeing Eye discussing the Cowl of Nocturnal. Through this note you learn that the Cowl was indeed stolen from Nocturnal and that she has made it known that the cowl is cursed. To quote the note: "Whosoever wears it shall be lost in the shadows. His true nature shall be unknown to all who meet him. His identity shall be struck from all records and histories. Memory will hide in the shadows, refusing to record the name of the owner to any who meet him. He shall be known by the cowl and only by the cowl." The note continues to say that the monks want to find the cowl in order to see if the curse does exist, and research further on how to remove the curse.

During the final Thieves Guild quest, the identity of the original thief becomes apparent: it was a thief named "Emer Dareloth", who went on to befriend Jakben, Earl of Imbel and owned a large house in the Waterfront District of the Imperial City.

If you talk to The Gray Fox after finding this note, he tells you that it is all true and that not even his family knows who he is anymore. He tells you that he even just told you his real name twice, but your muddled memory won't remember. He has, however, found a way to break the curse. Completing his quests will restore the unmasked identity of The Gray Fox.

"It's the Gray Fox! You're under arrest!"

"You're wanted dead or alive, Gray Fox. This will be easier if you're dead!"
"You're the Gray Fox! You're under arrest for… for… for all kinds of stuff! You're wanted dead or alive. I'm choosing dead."
Resist Arrest
"Then pay with your blood" [Not Gray Fox related dialogue, but they do say it if you resist arrest them.]
"I'll make Captain for this!" [Even Guard Captains say this.]

It is possible to steal the Gray Cowl from the Gray Fox, provided that you have advanced through the Thieves Guild questline to the stage where you have met the Gray Fox. †

† There are also two glitches that allow the cowl to be stolen earlier. Visiting the Temple of the Ancestor Moths will trigger the Turning a Blind Eye quest and allow you to visit the Gray Fox in Bruma, and stealing the Boots of Springheel Jak from Jakben, Earl of Imbel will start the Boots of Springheel Jak quest and enable the Gray Fox, although his location will depend on how far you have progressed through the Thieves Guild quests.

Remove Your Bounty Without Paying a Doyen[edit]

If you pay off your bounty to a Doyen, the bounty will go away until the next time you take off the cowl. However, since the Gray Fox's bounty is always so high, you can take inconvenience in lieu of 500 gold down the drain with this exploit:

When you get out, your bounty will be at 0, so guards will not attack you.

If you talk to a guard however, he will run through his default "Gray Fox arrest" dialogue (even though the bounty will be at 0), and you will have broken the exploit. You will also break the exploit if you ever take the cowl off.

Another way to accomplish clearing your bounty is to install the Shivering Isles expansion pack. Enter the Isles without wearing the cowl, and put the cowl on once inside. Because the game is unable to modify your Cyrodiil bounty while you are in the Isles, exiting them with the cowl equipped will result in the Gray Fox having the same bounty as your character did when entering Shivering Isles. This bug also works in reverse; if you wear the cowl while entering the Shivering Isles and exit with it unequipped, your 'normal' character will have the same bounty as the Gray Fox (note that the game is also unable to adjust your Fame and Infamy while in the Shivering Isles, so wearing the cowl in and coming out without the cowl will leave you with the Gray Fox's Infamy and Fame).