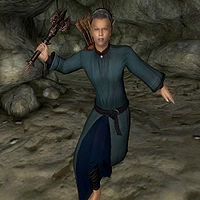 Githriian is a Bosmer mage who is hiding out with her fellow thieves in Hrota Cave, just north of Anvil.

Githriian wears a mage's robe. In combat she will either use her leveled bow with its leveled arrows, or her other weapon--which can be any type of weapon besides a staff--as well as any of her leveled spells. She also carries a small amount of gold.

Githriian waits near the entrance of Hrota Cave all day and night, without sleeping or eating despite being near resources for both. She will attack on sight without explanation, and will accept no yield. Defeating her is necessary to advance the quest Den of Thieves for the Fighters Guild.