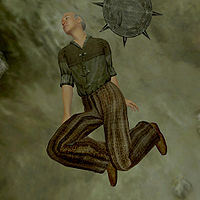 Galtus Previa was an Imperial farmer who went looking for gems in Nonwyll Cavern and never returned. His aunt has hired the Fighters Guild to investigate his disappearance.

You will find Galtus dead in the northeastern chamber of the Nonwyll Chamber of the Titans, his body mysteriously intact even though two savage trolls can be found nearby. Apparently, Galtus never even saw it coming, as his only equipment is a broken shield and a set of random, lower-class clothing.

Modryn Oreyn will provide some information as to what Galtus was doing in the caverns when asked about the related contract: "We got the contract from his aunt. Was in Nonwyll looking for gems of some sort. Never heard from again." After you have discovered Galtus' dead body, your sidekick, Viranus Donton, will be utterly shocked: "Dead. I can't believe it. So much death." Back in the guildhall, Modryn Oreyn will be equally surprised: "Dead? Damn! What got him?" Once you tell him, he will be puzzled by one thing: "I suppose that's it, then. Odd that there weren't creatures around the body, though, and that it hadn't been eaten."