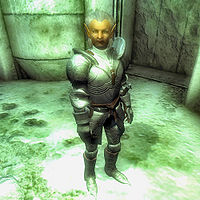 Fithragaer, a Bosmer battlemage, is an Associate of the Mages Guild. He is the only survivor of a detachment of battlemages sent to the Ayleid Ruin of Nenyond Twyll in search of Mucianus Allias. He spends all of his time wandering in the entrance of the first zone, but the ruin can only be accessed once the related quest is active.

When you enter the ruin and he sees you, he will run towards you in a state of panic and say, "You? What are you doing here?" When you ask him who he is, he tells you, "Fithragaer. Battlemage. Sent by the Council to find this traitor.... He must've told them we were coming! We've got to get our hands on him, before he tells them anything else! Who the blazes are you, anyway?" When you tell him, he will be shocked; "Has the Council gone mad, sending you here alone? There's no time. The others... they were waiting for us. They knew we were coming! I'm the only one left. The Necromancers retreated further in, but we've got to follow them. There's no time to waste! Follow me!"

After this conversation, he will carelessly run towards the inner part of the ruin, and will probably die once he activates the ceiling spike trap in front of him. If he manages to survive, he will stand still just past the trap. After you've found Mucianus Allias, he will slowly make his way back to the entrance zone, which means he will activate the trap yet again and may well be slain this time.

He is clad in an almost complete set of steel armor consisting of everything but the helmet and shield. He also carries a red velvet blouse and garment, which he never uses, and a sizable amount of gold. In combat, he relies on a steel war axe and on a leveled set of battlemage spells from all schools except Illusion.