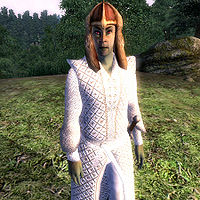 Ferul Ravel is a Dunmer savant who is a devout worshipper of the Daedric prince Sheogorath, and can be found with his fellow worshippers at the Shrine of Sheogorath. Chew some fat with Ferul to find out what Sheogorath favors.

While the other worshippers spends lots of time worshipping, Ravel is more of an outsider and simply wanders around near the shrine 24 hours a day, without ever eating or sleeping.

Ravel wears white mage's robes, iron boots and a fur helmet and carries a few gold coins. In combat, he relies on an iron dagger and a leveled set of sorcerer spells.

Obviously Ravel acts as the leader of the lunatics, and when approached, each and every worshipper will point you towards him for further information. Gregory Arne will say: "Bugs. Bugs! Everywhere. All over. Wonderful, tasty bugs. No time for you. Talk to Ravel. He doesn't like the bugs. Not even with mead.", while Ortis will comment: "I wish there were children here. Scrumptious, darling children. I haven't eaten in so long. Ravel will tell me what to do. You, too." Angalsama will say: "Have you seen it? Have you seen the light? The bright, shining light? I know it. It waits for you. Speak with Ravel. He knows the way." and Beewos will round up the madness by saying: "I used to be a dog. I got better. Not a better dog, though. I'm a terrible dog now. Tomorrow...who knows? Ravel may know. Talk to him."

Similar to the other worshippers, Ferul has given up all common sense and sanity to please the Madgod. He is, however, the one who knows how to approach the shrine and will greet you like this: "Place. Not place? Here. Not here? Welcome to the Grove of Madness, stranger. Or go away. Who knows? Time will tell." If you ask him about the shrine, he will tell you a story: "Killed and ate a Bosmer there. But it made me sick. Saw Lord Sheogorath in the vomitus, so that's all right. Here to sacrifice? A limb would be nice." Should you choose to stop the conversation by stating you have no business here, he will say: "Then you should run along. Fly, fly! Take off, now. Scat! Make tracks. Get going. Run for your life. And have a nice day!"

Before you give the required offering to Sheogorath, Ferul will have nothing to say to you and will dismiss you quickly: "You've been told what Sheogorath wants. The rest is up to you." After you have spoken with Sheogorath, he will be overwhelmed with joy: "You've spoken to the Madgod. Joy of joys! Are you elated? Excited? Aroused? Blessed are you. Blessed is He!" And after you have given the small settlement of Border Watch a taste of Sheogorath's madness and have received your reward, he will congratulate you in his own special way: "You've pleased the Madgod! You must be proud of yourself. I, for one, still would like to eat your eyes. But, good for you!"