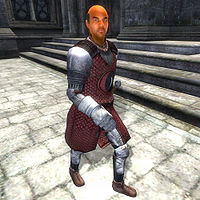 Dion is an Imperial guard and captain of the town guard in Skingrad.

He sleeps from midnight to 6am in his room on the top floor of Skingrad's guard house, mistakenly (see Bugs) patrols the Guard House from 4pm to 6pm and eats dinner there between 7pm and 9pm. The rest of the time is spent inspecting his charges in the town guard. When not sleeping, eating or patrolling the guard house, there is a 66% chance of him standing outside the Great Chapel of Julianos. If he's not doing that, then he will patrol on top of the bridge by the east gate to town or spend time in the Guard House. The exception to this schedule is when you begin the Paranoia quest, when Dion will actively seek you out to warn you about Glarthir.

Dion wears a standard guard uniform consisting of a Skingrad Cuirass with steel gauntlets and greaves that he wears with thick cowhide shoes. He also possesses a middle-class outfit of tan linens and brown shirt, both of which he'll be wearing while he sleeps. He wields a steel longsword and holds a key to the guard house and a few gold coins.

When asked about Skingrad, he will give you a few recommendations: "Try our wines and cheeses, and Salmo's sweetrolls. See the castle... but don't expect to see the Count. He doesn't mix with strangers."

Although Dion is in charge of the town's security, his colleague Danus Artellian makes it clear that his authority doesn't extend to the castle. Around town, Dion seems to be regarded fairly well for a guard, with Skingrad's citizenry only saying "I hope nobody tries to get away with anything when Captain Dion is around. He's a tough customer." and "Dion takes his job as Guard Captain very seriously. He's all business when he's working."

Once Dion gets to hear that you have asked about Glarthir he will find you and ask "A little bird told me that you've been asking around town about Glarthir. Our resident "eccentric." I'd like to know why." He will give more details depending on the choice the player makes: