The UESPWiki – Your source for The Elder Scrolls since 1995
< Oblivion: Quests: Mages Guild
Jump to: navigation, search

Speak with Kud-Ei in the Bravil Mages Guild about a recommendation for you. She wants you to go talk with Varon Vamori concerning the theft of Ardaline's Mage's Staff. In order to get the quest, make sure you talk to Kud-Ei about: Ardaline, Varon Vamori and Mage's Staff. She'll give you a Beguile scroll (providing a Charm effect) in case Varon is not cooperative.

Varon is either in the guild, at home (north of the guild hall), in the chapel, or in Silverhome on the Water. Confront him about Ardaline; he'll readily admit anything as long as his disposition towards you is at least 65. Once his disposition is high enough, he'll admit that he took her staff and sold it to Soris Arenim in the Talos Plaza District of the Imperial City. Return to Kud-Ei, and inform her about Varon selling the staff. She will give you three more Beguile scrolls and order you to retrieve the staff - discreetly of course. 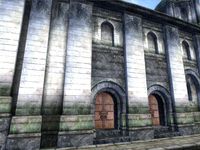 Find Soris' house in the Talos Plaza and confront him about the staff. If his disposition is low he will refuse to give up the staff. Raise his disposition up to around 70 or so and he'll hand over the staff for a little cash (200 gold). Alternatively, you can talk to Soriss' wife, Erissare Arenim: with a sufficiently high disposition she'll reveal that the staff is in a chest (although it is actually kept in a set of drawers) in the basement, and the key is in his desk (upstairs), although the chest can simply be picked or opened by an Open Lock spell. You can also choose to pickpocket the key from either Soris or his wife in order to open the chest. Return with the staff to Kud-Ei to earn her recommendation as well as a spell, Captivate. Be aware that the more-effective, lower-Magicka Beguiling Touch spell is available from Delphine Jend, also in the Bravil Mages Guild. Captivate is useful, however, as a free way of acquiring the spell effect for custom spellmaking purposes.

Next: There are seven Mages Guild recommendation quests that can be completed in any order:

Once all seven are completed, your induction into the Mages Guild is completed by: A Mage's Staff