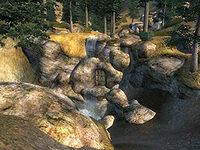 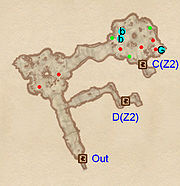 Black Rock Caverns contains one of the best-kept secrets in Cyrodiil, and as such, requires an unusual amount of exploration before the hidden path to it is revealed. Upon entering from door Out, head down the long corridor, and notice the tunnel to the right leading to door D, one of two entrances to the second zone, Black Rock Main Chamber. Ignore it for now and continue to the first room, dispose of the two bandits, then proceed east to the second room, which contains more opposition and three chests with minor loot. Two choices are available; either backtrack to door D, or enter Black Rock Main Chamber through door C. Using door D is slightly more convenient for completionists, but will land you near a Tripwire in the next zone, so do not rush.

When you return to this zone (after activating the handle at I in the second zone), the handle at G will have spawned, along with two ghostly Black Rock Pirates. Kill the ghosts, then locate the initially non-existent handle and turn it. When you are done, reenter Black Rock Main Chamber through door C.

If you arrive to the Chamber from door C, you are most likely detected by the residing enemies, including a boss-leveled Bandit at A. If you arrive from door D, make sure to avoid the Tripwire (G) and the corresponding Swinging Log at F. Regardless of your choice of entrance, loot the chest near the trap and search the large camp for valuables. When done, search the southeastern wall for a turn handle (I) cleverly hidden behind a rock jutting out of the wall. Activating this handle makes an initially invisible handle appear in the first zone, and it also raises the nearby rock wall at H, making door C the only available option. Additionally, turning the handle also spawns two Black Rock Pirates in the first zone, so be prepared for a surprise attack.

After turning the initially invisible handle in Black Rock Caverns you will return to this zone through door C. Check out your map and notice that a trap door leading into Lost Black Rock Chasm has spawned at E, visualized by a blue mist rising from below. The secret is revealed and will net you loads of treasure protected by hard-to-kill ghosts, so equip yourself accordingly before entering the Chasm. 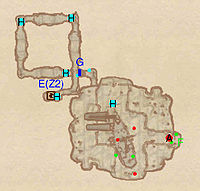 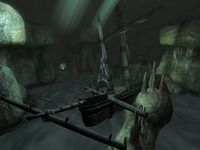 The ladder (E) leads right down to a Dead Bandit (H), lying in a pool of his own blood. As you make your way down through the spiraling tunnel, you will have to step over three additional dead bandits and a few skeletons until you arrive near the Rock Wall at G, lowered by the nearby turn handle (cyan dot on map). The rock wall reveals the incredible sight of a landlocked pirate ship docked in knee-deep water and three ghostly pirates wandering about chatting to each other, like nothing has happened. They will attack you on sight, so be prepared. In the eastern alcove, the Black Rock Captain (A) guards the Black Rock Chest, and two additional chests, all three worth fighting for. In the unlit brazier, a selection of jewelry is halfway hidden under the sack. Another chest is located on the ship itself, near the steering wheel, while the last chest can be found in the narrow space southwest of the ship. Make sure to examine all of them as they can contain a considerable amount of gold. When you are done, backtrack to the Rock Wall and lower it using the push button then make your escape via the ladder at E.