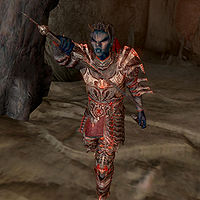 Amkaos is a Dremora located in Mankar Camoran's Paradise. He works under Orthe and will be hostile to you when he meets you. If you manage to speak to Amkaos (such as by charming him sufficiently), he'll dismiss you with either "This area is off limits, worm! Get back to your cage!" or "You are not to speak to me, worm." He is one of the torturers along with Orthe and Ranyu.

Amkaos wears Dremora Kynreeve boots, greaves, and a cuirass. He carries a Dremora Longsword and a leveled potion. When it comes to spells, Amkaos has an arsenal of magic from the Destruction (minor and major) and Mysticism (major) schools. He also possesses a Dremora race ability which gives him a small resistance to everything.