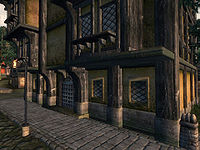 Ahdarji's House is located between the northeastern slums and the upper-class southern district of Leyawiin. It is to the south of Weebam-Na's house and opposite J'Bari's House, with Rosentia Gallenus's house and the house for sale across the way to the west.

The large, two-story home is divided into two wings, east and west. It is neatly decorated and aesthetically pleasing; retirement agrees with Ahdarji.

Hidden away behind the cupboard in the entryway of the ground floor is a locked jewelry box containing up to three pieces of jewelry (one possibly enchanted) and a small chance of a potion (10%).

Although Ahdarji never eats at home, the east wing on the main floor consists of a dining room richly dressed with silverware, food, and drink, including a sweetcake. An open cupboard on the west wall of the dining room has a random potion. A locked chest holds a leveled weapon. In a small room off the dining room is a cupboard and some drawers, containing up to eight and six pieces of upper-class clothing (75% chance), respectively. Another locked chest contains up to three pieces (75% each) of lower-level armor or weapons. Atop the cupboard is another random potion.

The first floor west wing is a sitting room. A random poison is on the bookshelf in the southwest corner and a random potion is on the window ledge. The small room off the main area has a locked chest holding some gold and jewelry (25%). Two valuable books, The Argonian Account, Book 4 and Dwemer History and Culture, are on the bookshelves.

The east wing of the second floor is used as a storage room and wine cellar holding a large stockpile of Surilie Brothers wine.

The second floor's west wing serves as the private quarters. The room to the left is the bedroom. At the foot of the bed is an unlocked chest with the Light Armor skill book Ice and Chitin.  A potted nirnroot is on the windowsill next to an unlocked clutter chest. The room to the right has a desk with a bottle of Cyrodilic brandy and a letter from a secret admirer.