After returning from Gaiar Alata, the Champion will follow Martin to the outskirts of the Imperial City, now overrun with the Mythic Dawn Cultists and Mehrunes Dagon himself. Martin explains that Mehrunes Dagon is the only thing standing between them and the Dragonfires. No mortal weapon can harm Dagon, so their only hope is to avoid him until the mission is complete. Lighting the Dragonfires will seal the rift between Cyrodiil and Oblivion, saving Tamriel from destruction.

Martin will join the Champion's party. The Temple district is a single level map with a number of Mythic Dawn Cultists and fire casting Scamps. A player must navigate left around the city walls and North through the gardens. When passing the walls, an invincible cultist will follow the Champion and try to attack from behind. The Cultist will continue to slowly follow the player for the duration of the quest. Entering the door to the temple on the far north of the gardens will finish the quest. 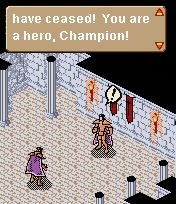 "Martin and you arrive at the Temple of the One, but Mehrunes Dagon breaks through the Temple dome and threatens to destroy you.
Martin shatters the Amulet of Kings and transforms himself into an avatar of Akatosh, the Dragon God of Time.
In the dragon form he banishes Mehrunes Dagon into Oblivion and Ends the Oblivion Crisis...
...and then vanishes.
Whether he is dead, or has Ascended to join his ancestor Tiber Septim, no one yet knows."

After the epilogue plays, the Champion and Jauffre are found inside Cloud Ruler Temple. Jauffre congratulates the Champion on ending the attacks against their plane and expresses sorrow for Martin. He bids the Champion farewell, saying "Cyrodiil waits for you. You are free to go, Champion, with the thanks of the entire Empire." The Champion thanks Jauffre and leaves, in hope that they will someday meet again.