"The moon rose over Tamriel, red with Imperial blood.
The sons of the Emperor have been slain by a mysterious cult, the Dragon Throne to be their next target.
The Imperial guards rush to smuggle the Emperor out of the Imperial City through a secret passage in the prison but the cult struck too quickly..."

The game opens with the palace guards escorting the Emperor of Tamriel to a secret passageway in the Imperial Prison. The protagonist, an impolite and graceless prisoner, soon to be known as a Champion, watches in wait. The cultists approach and slay the guards; the Emperor fends them off but is mortally wounded in the process. He hastily calls the Champion and entrusts him the Amulet of Kings, with instructions to deliver it to someone named Jauffre. The Emperor passes on, and the Champion seizes the opportunity to make his escape. 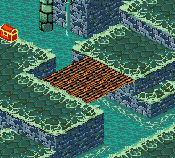 The Champion dons the Emperor's garments as another two cultists approach. They notice the Amulet and attack, from which that point onward the player has control. After slaying the cultists, a passageway will open on the rear of the Champion's cell. The passage is a single level map with a number of Mythic Dawn Cultists and spell casting scamps. New players should be mindful of poison attacks which will greatly damage a player's health if untreated.

The player should head far left up the two ledges and south from the chest. A switch can be found beside two cultists.

Activating the switch will open a drawbridge near the center of the level. The player may cross it, jump up the ledge and head west.

Follow the winding path past the chest and across the gap, activating the gap will allow the Champion to jump across. Head North to the next gap, until the level finishes and the quest ends.