Vernon can be found in the North most part of Bruma during the Spies quest; he will appear as a civilian standing next to the city gates. 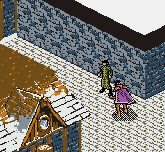 When you talk to him, he will be impressed with your taking care of the assassins and will suggest that you could help him rescue his missing Commander - whom of which he was recently separated with during the last Daedric incursion into the city.

Activating one of the three doors in North Bruma will take you out the Cyrodiil. Cyrodiil in a two level maze with a number of Mythic Dawn agents. You can move to the second level from the first by activating the small Ayleid ruin on the south-east corner of the map.

The commander - Rufus - will be found standing of the far south eastern corner of the second level. He will be much relieved to find you. 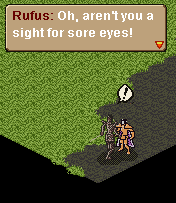 Rufus is obviously pleased to see you...

Once the conversation with Rufus has finished you will be returned to Northern Bruma, Vernon and the commander united once more. Speak the Vernon once more and he will thank you and give you a Silver Shortsword as a reward.