The UESPWiki – Your source for The Elder Scrolls since 1995
< Morrowind: Creatures: Undead / Merchants / Blacksmiths
Jump to: navigation, search 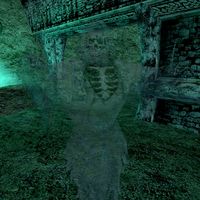 Oddly enough, Sul-Senipul is actually a merchant, which you may discover if you cast Calm on him and then speak to him. He has no goods to sell (except for Ectoplasm, which is sort of unusual, since you usually have to kill ghosts to get that from them), and no gold with which to buy anything. He carries the bow, but he doesn't sell weapons. He also can't use it as a weapon, being a creature and lacking arrows besides. He does, however, offer repair services, which you can take advantage of if you really want to. Being one of the only creatures who does this means you'll probably get slightly better prices for the service.