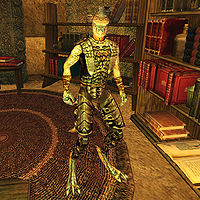 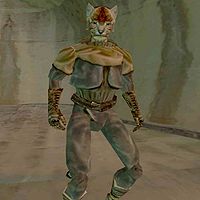 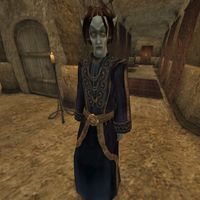 After the last errand, Caius tells you to train for a while and come back to him later. Specifically, your character needs to be at least level 3 before Caius will give you the next assignment. At that point, he sends you on a fact-finding mission to the city of Vivec. Your mission is to track down and rendezvous with three people: Addhiranirr, a Khajiit Thieves Guild member in St. Olms, Huleeya, an Argonian Morag Tong assassin at the Black Shalk Cornerclub in the Foreign Quarter, and Mehra Milo, a Tribunal Temple priestess in the Hall of Wisdom of the Temple Canton. Caius is once again looking for any Sixth House or Nerevarine Cult information and he gives you 200 gold for expenses. The quickest way is to take the Silt Strider or the Mages Guild Guide, but feel free to take the scenic route.

Huleeya is in the Black Shalk Cornerclub, in the Foreign Quarter Lower Waistworks. He should be easy to find, as he is the only Argonian in the room. Unfortunately, Huleeya seems to be having trouble with the locals, who will not let him pass. Talk with the Dunmer Ethys Savil, or one of his two friends, and persuade him to leave the Argonian alone. Raising his disposition a bit will work, but so will homicide. If you try to leave with Huleeya without talking to one of the thugs, they will attack and you will have to protect Huleeya. Please note that attacking the thugs first (in full view of Huleeya) will result in him refusing to talk to you. Once you've solved this, you may escort Huleeya unhindered to Jobasha's Rare Books. Jobasha's bookshop is on the same level as the cornerclub, in the Foreign Quarter Lower Waistworks, just on the opposite side. Once you're inside the bookshop with Huleeya, you will receive one Reputation point for your help and he will give you some notes to take to Caius. Also while at the bookshop, pick up the book Progress of Truth on the second floor far left bookcase as you will be needing it later in this quest. You can steal it when the Ordinator patrols elsewhere, or just buy it.

Addhiranirr is the next closest contact in the St. Olms Canton, southeast of the Foreign Quarter (past the Redoran and next to the St. Delyn cantons). It turns out Addhiranirr is difficult to find as almost no one in St. Olms knows where she is. With enough exploration and questions, you do eventually find her all alone in the northeast Underworks, hiding from a Census and Excise agent. In order to get anything out of her, the agent must be taken care of. The agent in question is Duvianus Platorius, who can be found in St. Olms Waistworks. As usual, you can either kill him or persuade him that Addhiranirr has fled. Note that if you happen to accidentally tell him where Addhiranirr is, you can still get the information Caius wants by raising Addhiranirr's disposition until she will talk to you. Also, if you tell Duvianus Platorius where Addhiranirr is and come back later to talk about the topic 'Addhiranirr', he will give you the response normally given if you had chosen to lie to him. Anyway, once the agent is out of the way, Addhiranirr will let you know that the Sixth House is into smuggling, but no one knows what due to intense secrecy.

The last of the contacts is Mehra Milo. She may be found in the Library of Vivec, located in the Hall of Wisdom in the Temple Canton at the southern end of Vivec. Once you find her and follow her to the back of the library, she will tell you what she knows about the Nerevarine cult. She'll also suggest that you obtain a copy of the book Progress of Truth for Caius. Although the library has a copy of the book, it is under guard, so she suggests trying the local bookshops, even though the book is officially banned by the Tribunal Temple. The copy in the library is the tall book on top of the bookshelf in the southwest corner. Alternatively, you can just buy a copy from Jobasha's Rare Books in the Lower Waistworks of the Foreign Quarter for 150 gold. Other copies can be found at:

Return the information to Caius, who will promote you to Journeyman and suggest you take more time to train and do some other guild work to keep your cover up. Come back for the next part of the quest in a few days.