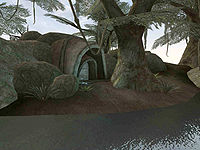 Thelas Ancestral Tomb is a small tomb west of Seyda Neen on the Bitter Coast.

The first room contains a shrine of St. Veloth and two urns filled with bonemeal and is guarded by an ancestor ghost and a leveled undead creature. The lower room is guarded by another ancestor ghost and undead creature and contains three more bonemeal-filled urns, a scroll of divine intervention, a hackle-lo leaf, a guar hide, a fire petal, and a key to two locked chests, which can be found in the ashpit. Although, the key might be bugged under the ground of the ashpit! The small chest contains rings and gold and the larger one holds jewelry and gold. 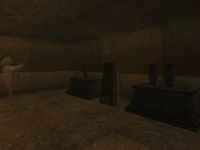 The first room of the tomb

The are three known family members: 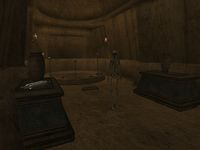 The main chamber of the tomb 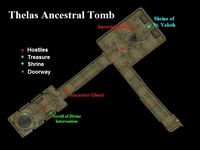