The UESPWiki – Your source for The Elder Scrolls since 1995
< Morrowind: Quests: West Gash / Miscellaneous
Jump to: navigation, search 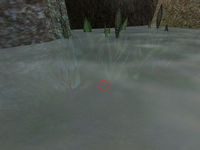 The ring is hard to see

Southwest of Ald Velothi, along the road, you will run into a lady named Synette Jeline. She complains that her ring has fallen into a nearby pond and wants you to get it. If you are playing a male character, her request is accompanied by some significant flirting as well.

The ring is in a shallow pool of water just north of Jeline. Since the water is so murky and the ring is so tiny, you may have a great deal of trouble locating it. A Night Eye spell may be of use here. The ring can be found lying next to the second plant from the south edge of the pool. If you dip your head just below the water, you can see through the surface without causing your vision to become murky or starting the breath timer.

Unfortunately, once you grab the ring, Jeline and her near-invisible friend, Tavynu Tedran will attack you. Kill them and take their loot of gold and magic weapons as a reward (the ring itself is relatively worthless). Tavynu Tedran has the Amulet of Shadows, a very nice item to have.