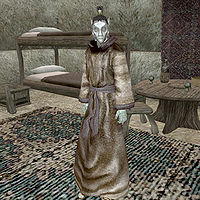 Taren Omothan is a Dark Elf monk and the master trainer of the Hand-to-hand skill. He can be found in the southwest bedroom on the lower level of the Holamayan Monastery. He is also a medium trainer in Acrobatics and Sneak.