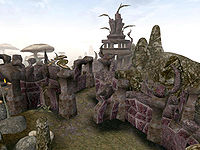 Shashpilamat is a shrine to Malacath on the Azura's Coast mainland, west of the Holamayan monastery. The exterior of the shrine is guarded by leveled daedra and an Orc barbarian. The interior of the shrine consists of two unconnected areas. The first, a small room called simply "Shashpilamat" houses an Orc worshipper by the name of Glush gro-Dul. While hostile, he will offer medium training in Acrobatics, Light Armor, and Sneak if calmed. The room also contains a few bedrolls and quite a few clutter containers, most notably two barrels of random alchemy ingredients and crates containing random beverages, scroll, or magical weapons. In the back left corner is a locked chest containing a random selection of Orcish armor. 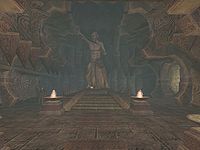 The main shrine chamber contains two more Orc worshippers, including a warrior with a full set of Orcish armor. The altar itself holds several expensive alchemy ingredients, including a ruby, a emerald, a diamond, a piece of raw glass, a piece of raw ebony, and a daedra's heart. Also on the altar is an expensive (though cursed) fiend spear. A small side passage leads to a collapsed doorway, but also holds two locked chests, one trapped containing an assortment of gems and magical clothing and the other containing gold. On top of the chests is a scroll of shockbane and a bargain potion of shadow.