The UESPWiki – Your source for The Elder Scrolls since 1995
< Morrowind: People / Spell Merchants / Trainers
Jump to: navigation, search 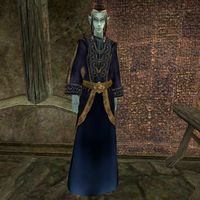 Ranis Athrys is a Dark Elf nightblade and Wizard in the Mages Guild. She serves as Guild Steward of the Balmora branch. Ranis demands respect from those who come under her authority. Due to this, some lesser mages like Ajira dislike her as a leader.

Ranis seems to naturally distrust mages not from the guild, possibly due to the fact her parents were killed by a previous archmagister of House Telvanni, as mentioned by Llathyno Hlaalu. Trebonius Artorius says that while she hates the Telvanni House, she has also been trying to intimidate rogue Telvanni into joining the Mages Guild instead. As a result, some Dunmer (particularly Telvanni) would like to see her gone, and she has a few enemies. Most quests given by Ranis involve the affairs of other mages, meaning the conversion or destruction of mages outside the Guild.

Ranis is wearing an expensive robe with a matching ring and shoes. She is carrying a steel tanto. Aside from her natural resistance to fire and the sanctuary provided by her ancestors, she knows the following spells: Crushing Burden Touch, Great Burden of Sin, Heavy Burden, Fifth Barrier, Sixth Barrier, Strong Feather, Ulms's Juicedaw's Feather, Tinur's Hoptoad, Concealment, Far Silence, Shadowmask, and Soul Trap.

Additionally, she is also one of the people who will let you join the guild, as well as a medium trainer in Mysticism, and a minor trainer in Alteration and Illusion. You must be at least a conjurer in the guild to access her services.

Ranis has the following spells for sale: