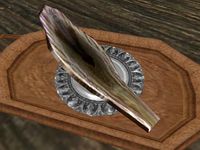 "Racer plumes from the native bird-like cliff racer are used locally and throughout the Empire as decorations for garments and household goods."

Racer Plumes can be found by killing Cliff Racers, which can be found - well, let's face it, where can't they be found? You shouldn't have any trouble collecting more than you could ever need of this ingredient, used pretty much exclusively for making Levitate potions. (Mix with Coda Flower or Trama Root.)

In case you're not unlucky enough to be swarmed by dozens of these annoying creatures every minute you spend outdoors, these vendors carry a restocking supply:

* Cienne's ingredients are stored in a chest in her shop, rather than on her person. If you can gain access to this chest without being caught, you will have an unlimited supply.