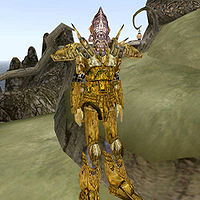 Mollimo of Cloudrest is an Altmer warrior and head of the Telvanni Guard at Tel Branora. He is wandering the ramp outside the tower. Mollimo wants you to discreetly take care of a problem involving Trerayna Dalen.

Mollimo wears a devil cephalopod helm, a Dwemer cuirass with matching greaves, bracers, and boots, both Armun-An bonemold pauldrons, an extravagant shirt and pants, a third barrier ring, and a blood despair amulet. He also carries a fiend battle axe along with up to 100 gold. Aside from his natural weaknesses to fire, frost, shock and magicka, his natural bonus to magicka, and resistance to disease, he knows no spells.

While Mollimo believes that he could handle Trerayna and her gang of thugs by himself, he has been ordered by Mistress Therana to not leave the tower. He clearly wants the situation dealt with as soon as possible, as when you talk to him he will immediately offer you 1000 gold to kill her: "Outlander. Would you like to earn some gold? Take care of Trerayna Dalen for me. She's a petty annoyance, but Mistress Therana won't let me leave the tower to take care of her. Don't be fooled by her thugs. The armor is impressive, but there's not much inside it. Kill Trerayna Dalen, and I'll pay you 1000 gold." If you talk to him again before killing Trerayna, he will greet you by saying: "What's the delay? You want your gold, don't you? Kill Trerayna Dalen, and I'll pay you 1000 gold." After you have killed Trerayna, Mollimo will be quite happy that Trerayna will no longer be a problem, saying: "Well done, outlander. I can report to my mistress that Trerayna Dalen is no longer a problem. I'll mention your name... for what it's worth. Here's your gold. And my thanks." You will then be given your reward of 1000 gold and Mollimo's disposition toward you will increase by 20. In subsequent conversations he will now greet you by thanking you again: "You did well, outlander. Thank you."