The UESPWiki – Your source for The Elder Scrolls since 1995
< Morrowind: Quests: Daedric Quests / Gnaar Mok
Jump to: navigation, search

The shrine is located in Assurdirapal in the Sheogorad region on the long island west of Dagon Fel (just west of the Sanctus Shrine island).

Talk to Malacath and he will tell you a story about an elven hero by the name of Oreyn Bearclaw. Actually, he is no hero at all but was falsely credited with the deeds done by his friend, an Orc named Kharag Gro-Khar. Malacath wants you to destroy Bearclaw's legend by killing the last of his bloodline. If you do, you will receive the Helm of Oreyn Bearclaw as your reward. 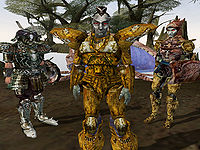 Head toward Vivec as suggested by Malacath to begin your search for the descendant. You should be able to find out that the last of Bearclaw's line is Farvyn Oreyn and that you can find him near Gnaar Mok. Ask some townsfolk to find out where he is, south of town. You will find him clad in Dwemer armor and in the company of two bodyguards. If you talk to him, he will freely admit that the legend of Oreyn Bearclaw is a falsehood. Telling him you have come from Malacath, or promising to keep the truth a secret will result in him and his guards attacking you. Farvyn is fairly easy to kill, but his two bodyguards are not, so be careful. Once you have killed him, return to the shrine to pick up your reward.