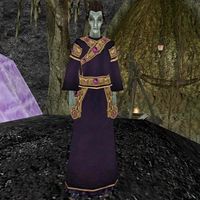 Llunela Hleran is a Dunmer enchantress and Wizard of House Telvanni. She is located in the Hermitage of the Sadrith Mora Telvanni Council House. She is wearing a pair of extravagant shoes with a matching robe and ruby amulet, as well as up to 100 gold.

Llunela is involved in the construction of your Telvanni Stronghold. Beyond that, it is unclear as to what role she plays in House Telvanni, but her lodgings do resemble those of a Hermit. Galar Rothan also said that he heard her say she wanted to incorporate some of the defenses she's seen in Dwemer ruins into her next stronghold.

Most of her unique dialogue is related to the Stronghold quest:

If you haven't yet given her the construction contract:

"House Telvanni has expanded too quickly. We have allowed our young and ambitious to build unauthorized bases all across Vvardenfell. To avoid trouble with the Grand Council, you should make your stronghold official. Only Duke Vedam Dren in Ebonheart can issue construction contracts."

If you already gave her the contract:

"Yes, you have given me the construction contract. I trust it was not too difficult."

When you first have the option of asking her this, she'll say:

"There is a book, "Secrets of Dwemer Animunculi," which has been lost for many years. I know that this books lies in the Vampire-infested ruins of Galom Daeus. When I have this book in my possession, your stronghold will be the first in ages to be guarded by Dwemer Centurions."

If you speak to her again, she'll say:

"Have you found this book, %PCName?"

You have the option of saying one of the following:

Yes, here it is.
"Yes, this is exactly what I need. This, along with the schematics you brought me should be enough to unravel the secrets of Dwemer Centurions. I will give the orders to begin the last phase of your stronghold. It should go quickly... but it should take at least five days."

No, not yet.
"Then return to Galom Daeus and continue your search."

If you ask her about it again after bringing her the book, she'll say:

"You have brought me the book, %PCName. I hope your stronghold is satisfactory."

After asking about the Dwemer Animunculi, you'll be directed to this ruin. Asking her about it receives the following response:

"To get to Galom Daeus, go south from your stronghold until you reach a river of lava. Follow that river to the west until it ends. You will see another pool of lava ahead of you. Galom Daeus lies beyond that pool."

If asked about herself, she says:

"Yes, I am Llunela. I am the stronghold builder for House Telvanni."

For your stronghold, you'll need two strong souls. She'll provide the two grand soulgems, along with the following information:

"Here, take these grand soulgems. Fill them with the souls of a suitable Daedra. The best souls to use are Storm Atronachs, but more powerful Daedra such as Winged Twilights and Golden Saints will work as well."

If you ask her about it again before filling the gems, she'll say:

"I gave you two soulgems. Fill them with the souls of Storm Atronachs, Golden Saints, or Winged Twilights. Perhaps someone around here knows where you can find such strong souls."

After filling the two gems, return to her:

"You have brought me the soulgems. The power in these souls will strengthen your stronghold's foundations and help the tower grow."

This Morrowind-related article is a stub. You can help by expanding it.
Retrieved from "https://en.uesp.net/w/index.php?title=Morrowind:Llunela_Hleran&oldid=2178434"
Categories:
Hidden categories: