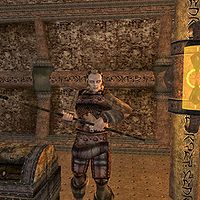 Kjeld is a Nord vampire of the Quarra Clan who lives in their headquarters in Druscashti. If you are a member of the Clan, and have completed The Cult of Lord Irarak quest, he has a selection of armor and weapons for sale, including the extremely rare Daedric Greaves (one of only three pairs available in the game). If you are not of the Clan, however, he will attack you on sight. Many years ago, he had a run-in with the son of Dhaunayne Aundae, for which the Aundae Ancient would like him disposed of.