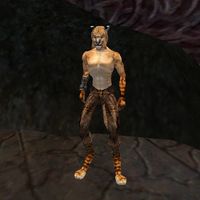 J'Saddha is a Khajiit slave who has escaped from Ald Velothi. He is being sought by three slave-hunters, Anes Hlaren, Garyn Girith and Sadal Doren. You will be asked to throw them off his trail in a Twin Lamps quest.

J'Saddha only wears a slave bracer and common pants, which are also the only two objects that he carries on his person. Like all Khajiit, he can see well in the dark and can demoralize others for short periods, but otherwise he knows no spells.

If you try to speak with him without first accepting this quest from Ilmeni Dren, he says:

After Ilmeni Dren sends you to Ald Velothi, the Khajiit becomes more talkative:

If you speak with him while he is acting as your follower, he says:

Finally, when he has safely made it to the dock, J'Saddha has the following things to say: