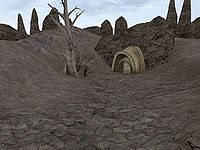 Indaren Ancestral Tomb is a Daedra-occupied tomb in the northern Ashlands.

The tomb can be found to the north of Bthuand and east of the Urshilaku Camp. It is locked with three 100pt. doors, and houses five Daedra guardians. The loot is just a few potions and some ingredients. There are three dead bandits here: Jonis, Pegasai, and Tyronius. Tyronius has an emerald, a key to Venim Ancestral Tomb, and a scroll explaining what happened to them. At the ash pit at the bottom is an unlocked chest with two random weapons.

There are six known members of the Indaren family: 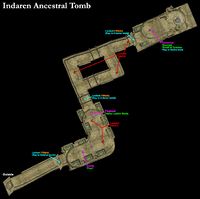