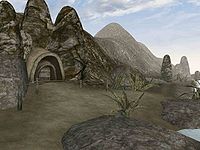 To reach the tomb, start out at Molag Mar, head to the coastline to the southeast, then follow it south. The tomb is located on the western side of the river.

A shrine of St. Veloth is here. There are four undead enemies guarding the tomb, and a potion, a Telvanni mole crab helm, a scroll, a copy of The Firmament, a journeyman's lockpick, repair prongs, and some ingredients comprise the loot that can be found here. 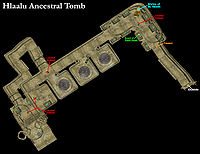