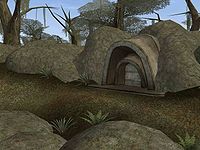 Heran Ancestral Tomb is a small tomb on the Bitter Coast, south of Hla Oad.

The first door in this tomb is locked, but there is a key on the wall right by the entrance. Once inside, the tomb appears to have been partially looted and ransacked by grave robbers; funeral urns are scattered everywhere, furniture and tapestries strewn about, jewels on the ground. Three leveled Daedra guard this tomb and there is a Shrine of St. Veloth.

Loot consists of an exclusive fortify strength potion, a scroll of invisibility, a copy of the Light Armor skill book 36 Lessons of Vivec, Sermon 28, some ingredients, and a number of gold coins and two emeralds scattered across the floor. 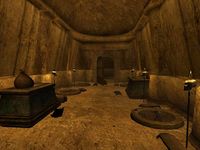 There are two known members of the Heran family: 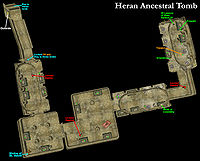