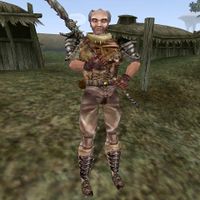 Frinnius Posuceius is an Imperial herder working at the Dren Plantation as a netch herder. He considers the job easy, but tedious, and can tell you a bit about netch and their behavior.

Frinnius holds one of the three slave keys at the plantation, which you can use to free the slaves working there. If you do free any slaves however, he will turn hostile.

He wears a netch leather cuirass, pauldrons, and boots along with a common shirt with matching pants and gloves. Besides his slave key, he carries a chitin spear. Aside from his natural charm and ability to absorb fatigue from others, he knows the following spells: Cure Common Disease Other, Cure Common Disease, Regenerate, Blightguard, and Rilm's Cure.