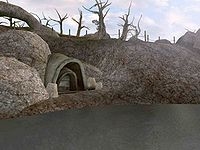 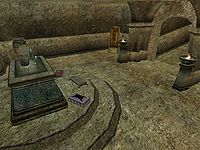 The tomb is a little east of Hentus Yansurnummu, the man who "lost" his pants. The entrance is on the western bank of the river, almost at water level.

There are three leveled daedra guarding the tomb when at level 3 or higher. You will find a few shrines of St. Veloth in the tomb. You'll find a few ingredients, repair prongs, and minor equipment. In the main room, there is a locked door which can be opened with the key to Falas tomb found in the southernmost room. There is nothing behind this door but some old bones and spiderwebs. Behind the other locked door, also opened with the tomb key, you'll find a copy of 36 Lessons of Vivec, Sermon 1, a skill book for Athletics. The Ashes of D. Bryant and Denstagmer's Ring can be found in a labeled and trapped urn in the lower part of the tomb.

There are two known members of the Falas family: 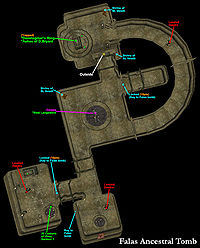