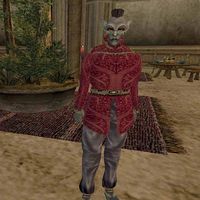 During the related quest, Baladas Demnevanni will have you find a copy of the book Antecedants of Dwemer Law. If you ask Codus Callonus about the book, he will direct you toward Ethes, mentioning that Ethes was studying the book in the hopes of passing the Imperial Exams and moving to Cyrodiil. Ethes will offer to sell you his copy of Antecedants of Dwemer Law for 300 gold.

He is wearing an extravagant shirt with matching pants, shoes and belt. Aside from his natural resistance to fire and the sanctuary provided by his ancestors, he knows no spells.

I agree. Here's 300 drakes.: "Here. If there's anything else I can do for you, let me know." (300 gold removed from inventory; Antecedants of Dwemer Law added to inventory)
Nevermind.: "If you change your mind, I will be here."

"I don't have a copy I can spare." (after you have purchased the book from Ethes OR after you have provided Baladas Demnevanni with a copy of Antecedants of Dwemer Law)