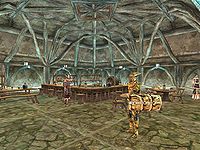 Entertainers is a plugin that adds the option to entertain the patrons of the Eight Plates in Balmora for Dulnea Ralaal. You can perform a variety of tricks to receive a small cash reward.

"Speak with Dulnea Ralaal in Balmora, Eight Plates on the topic "entertain the patrons". She will give you options to tell jokes, dance the high-kick, play the drum, play the lute and sing, or juggle." —Official Summary

Dulnea Ralaal at the Eight Plates in Balmora will hire you as an entertainer, giving you option to tell jokes, dance the handy high-kick, play the drum, play the lute and sing, or juggle. To do the task successfully, you must have the appropriate skills and items. For instance, to successfully play the lute and sing, you need to have a lute with you and a high speechcraft skill. If you do a good enough job with any of these tasks, she will reward you with up to 100 gold. Entertaining will also affect your Disposition with the patrons (and not always for the better if you lack the skills). You can only entertain the patrons once a day.

When you speak with Dulnea, you will be given one of the 7 options, listed below:

There are four factors involved in telling good jokes.

Three factors determine your prowess as a drummer.

Play the lute and sing[edit]

You'll need five things to succeed as a singer.

There are three juggling acts you can perform. You'll either need 3 Small Kwama Eggs, 4 Large Kwama Eggs, or 5 Ceramic Bowls. Whichever you choose, you'll need to have some pretty respectable Agility, unless you want to make a real mess.