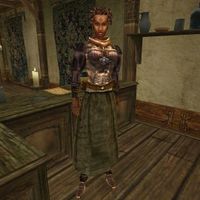 Elone is a Redguard scout and a Journeyman in the Blades. She can be found at Arrille's Tradehouse in Seyda Neen. As a scout in Vvardenfell, Elone is a good resource for information about various locations as well as good directions to these locales. Ask her about Balmora and she'll write you up some directions. She is one of the Blades Trainers that Caius Cosades will recommend to you, and if you ask her about it, she will give you a free copy of the Guide to Vvardenfell.

Elone wears a netch leather cuirass and a variety of common clothing, including a shirt, pants, shoes, skirt, and belt. She also carries a steel broadsword and up to 20 gold. Like all Redguards, she has a natural resistance to poison and disease, and can boost her health, strength, agility and endurance for a short period of time. Otherwise, she knows no spells.

Regarding Blades business, her duties consist of learning about Vvardenfell while keeping an eye on travelers passing through Seyda Neen.