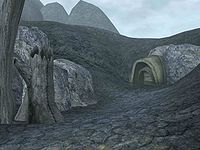 Dulo Ancestral Tomb is a hideout for some vampires in the northwestern Molag Amur region. To find this tomb, start at Marandus, and head due east across the water. On the other side you should see Vandus Ancestral Tomb. Follow the nearby path that goes east. When the path branches, head north, and when it branches again do the same thing. The tomb is at the end of the path. It is a vampire lair, and as such, it is guarded by five vampires of the Aundae bloodline, including a copy of the only vampire trainer in the game. Loot includes a few ingredients, a repair hammer, some minor weapons, and an apprentice probe.

If calmed or snuck up on, the vampire trainer offers major training in Restoration, Athletics, and Destruction.

There are no known members of the Dulo family. 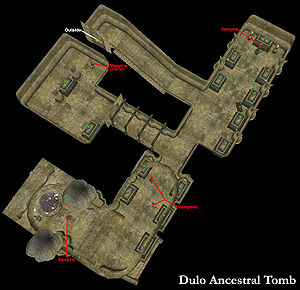