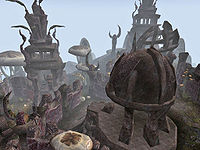 Bal Fell is a large shrine to Sheogorath on an island in the southern sea. It is divided into four sections: the Outer Shrine, West Wing, East Wing and the Inner Shrine. There are some Telvanni patrolling outside, and a couple of groups from the Mages Guild inside. There are also some dead scamps lying around, perhaps indicating that the mages have had some success fighting off the Daedra. There is some good treasure within the Inner Shrine, including a grand soul gem, and the locked chest on the altar has the unique Ten Pace Boots. 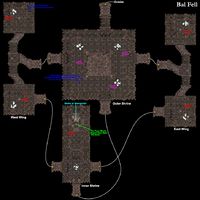