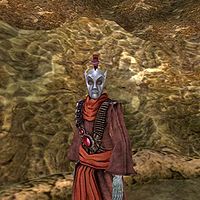 Alven Salas is a Dunmer monk who offers minor training in Acrobatics, Hand-to-hand, and Sneak at the Morag Tong Guildhall in Sadrith Mora. He is currently in possession of a valuable ring, the Black Jinx, which is currently sought by Mistress Dratha of House Telvanni. Unfortunately, he won't give it up easily, which can be a problem if you're also a member of the Morag Tong. You'll either need to kill him or knock him out and steal it from him. If you're a Master, or higher, in the Morag Tong, however, he will simply hand it over.

In addition to the Black Jinx ring, Alven wears common shoes and robe and he carries 20 gold.

If you are a Master or above in the Morag Tong:

If you are a member, but of lower rank:

"Yes, I have the ring, but we in the Morag Tong have a special interest in the ring as well. Would you steal from us, brother %PCName?"

If you are not a member at all:

"Suppose I did have this ring, this "Black Jinx?" Would you take what is not rightfully yours?"

You must persuade Salas to get the option of challenging him for the ring:

(Disposition at least 60) "If Dratha needs the ring so badly, I do not understand why she does not seek after it herself. Hiding behind mere servants like you is a sign of cowardice. Yes, I admit it. I have the ring. If you want it, you can fight me for it."

Challenge him to a duel. Right here, right now.: "So you do have some courage. We shall settle this now. To the death!"
Nevermind.: "So you are just another Telvanni coward. Go back to your servants, %PCRace. If you have any." (Disposition down by 5)

"I no longer have the Black Jinx."