The UESPWiki – Your source for The Elder Scrolls since 1995
< Lore: Places: Y(Redirected from Lore:Yorgrim River)
Jump to: navigation, search 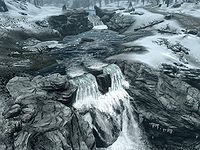 The River Yorgrim (also called the Yorgrim River[1]) is a short tributary in Skyrim which connects Lake Yorgrim to the White River. It flows east out of the eponymous lake in the Pale and enters Eastmarch, dropping through a series of waterfalls and rapids until it merges with the White River near the entrance to Windhelm.[2] A dragon burial mound is located near the river,[3] and superstition about nearby caves leaves many locals reticent to swim in its waters.[1]

The Yorgrim River basin notably had one of the earliest known sightings of Hircine. There exists a tale of a Nord hunter named Thane Icehammer who, sometime in the mid-late fifth century of the First Era, unknowingly killed several werecreatures during a hunting trip in the Yorgrim River basin. Angered by the death of his kin, Hircine thrust the Spear of Bitter Mercy into Icehammer's side, where upon the tip broke off and remained lodged inside him. Slowly, the magic of Hircine's Spear corrupted Icehammer's mind, and he became bitter and angry. This eventually resulted in him becoming mad, and he murdered an acolyte of Kyne in a fit of rage before fleeing to an ancient burial vault near Cragwallow, where upon he was sealed within as punishment.[4][5]

The Jurgald thanes and their families that ruled the area around the lower Yorgrim River for centuries notably worshipped Hircine and openly embraced his gift of lycanthropy. [6]